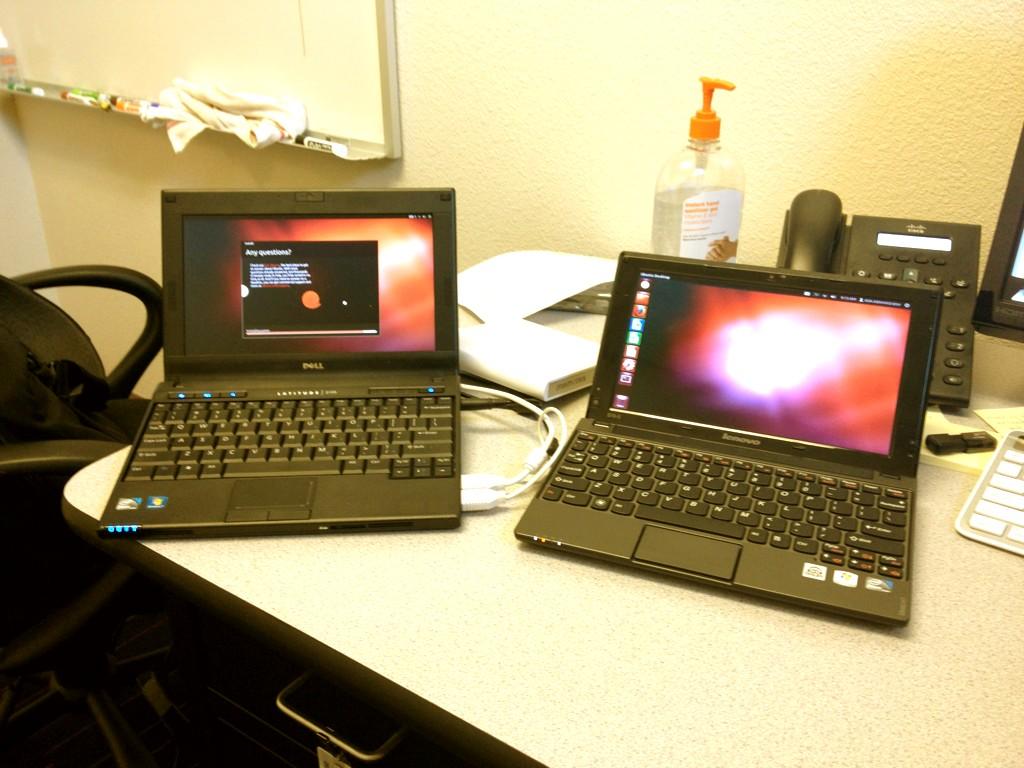 One of the big initiatives that I worked on at/for Arizona School for the Arts was the creation and standardization of mobile computer labs (MCLs for short) around the campus. The centerpiece of this initiative is a fleet of fifty MacBooks — more on that in another post. Predating those MacBooks is a collection of about thirty netbooks, or sub-notebooks: computers that are inexpensive but are woefully underpowered. On a good day, the netbooks could barely run Windows. On a bad day, they just didn’t work.

While it’s the dream of many in the faculty as well as the school’s administration to replace those netbooks with MacBooks, that’s a pipe dream that won’t happen. The least expensive Mac notebook is $1,000; it’d be foolish to spend that money. We’ve got these netbooks so let’s make them work better. Seeing how Windows is too bloated for the limited processing power of these machines, I thought of experimenting with a different operating system on these machines: Ubuntu Linux, a free/libre operating system.

I’ve played with Linux since 2008. In fact, in addition to my MacBook Pro, I have an older Dell workstation that exclusively runs Ubuntu Linux as well as Windows 7 in a virtual machine. I’ve seen that Ubuntu and Linux have come a long way in the past few years and if I were given the opportunity, I’d probably use it exclusively for my personal computing.

The initial selling point for me was the price tag: hey, one can’t beat free, no? But in thinking further on the matter, it just makes sense for the needs of the students. The students use these netbooks for mainly one thing: Internet research. By that criterion, Windows is much too overpowered of an operating system for that — even the stripped down Windows 7 Starter that was on these machines. With Ubuntu, there’s a choice of two Internet browsers: Firefox and Google Chrome. And there’s the free/libre LibreOffice suite embedded into Ubuntu, which offers full compatibility with Microsoft’s Office suite, and is perfect for the occasional word processing that the students need to do.

Now that the faculty have the netbooks in their hands after they’ve been re-imaged with Ubuntu, there have been compliments aplenty. The machines work…oh my! Gone are the days when the students would turn the machines on, wait a few minutes, log in, wait another couple minutes, and then get to work. The machines are on, connected to the Internet, and ready to go in about 60-75 seconds.

We have three different models of netbooks but imaging them all was quite simple. I picked a sample machine from each set, installed the OS on there (download here) and configured the settings on them to be how I wanted them to be (automatic login to a student user, login credentials to a dedicated MCL wireless network, default behaviors with power settings, and others), and took an image of the hard drive with Clonezilla. Then, on each machine, I copied that image over to the rest of the machines via flash drives. (Now, granted, I could have done this over the network; however, with a fleet of flash drives in operation, I could get through 15 machines in an hour.) And that’s that…the machines worked perfectly.

I realize that for many, swapping over to Linux isn’t appropriate or might present many problems. I’ve come up with a list of possible stumbling blocks:

For a mobile computer lab setting in which the primary purpose of the machines is to get out to the Internet, then I can’t think of a more elegant solution than this. Of course, time will tell to see how the students have adjusted to this system.