METRO light rail turns 4 today. Here are five of my wishes for the system in 2013 and beyond. 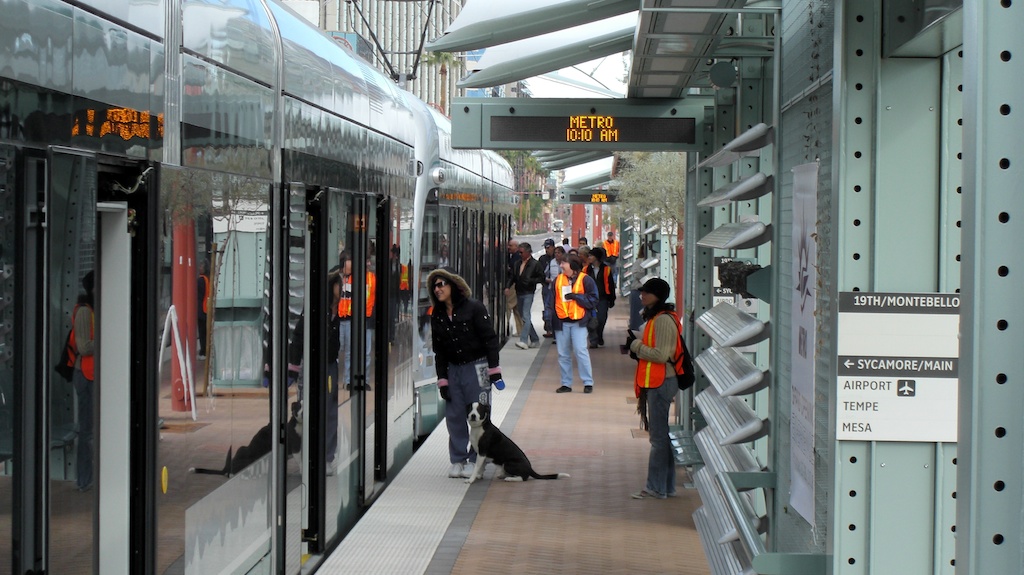 It’s hard to believe that we’ve had METRO light rail in Phoenix now for four years. It was on this day in 2008 when METRO trains first officially carried passengers across twenty miles in central Phoenix, downtown Tempe, and west Mesa. (The picture, right, is from the Encanto/Heard Museum platform just after the first trains started rolling on METRO’s opening day.)

As we look ahead to the future of public transportation in the Valley of the Sun, and as a very frequent rider, I have some observations and wishes for our beloved transit system in the coming year. They’re after the jump.

1. Run more three-car trains, especially during the afternoon rush commute and during major events.
Originally started as a pilot program, METRO has begun to run three-car trains during the morning commute. They don’t, unfortunately, run those same three-car trains during the afternoon commute and during major sports and cultural events along the line. Horror stories have been shared about METRO’s handling of this year’s Electric Light Parade, including long waits for already-crowded trains. The beauty of light rail is that it can be quickly responsive to increased demand. With METRO setting ridership records month after month, the demand is clearly there.

2. Enforce station etiquette rules (e.g. no smoking, no bike riding) better.
Despite pleas from the station PA announcements for passengers not to smoke at METRO stations and platforms or to walk their bicycles, there isn’t any enforcement of those rules. If I wanted to breathe bad air, I’d drive a car.

3. Evaluate station design for new stations on future extensions.
After four years of service, some elements of METRO stations have worn well and others haven’t worn as well. For instance, the porous brick walking surface is in bad shape with stains. (Related: We Phoenicians spit a lot…ick.) As new stations are designed for future extensions, I hope that METRO takes cues from its existing stock of stations and platforms to see what’s worked and what hasn’t.

4. Evaluate current bike rack system and integrate more bike racks into new and existing rolling stock.
With Phoenix’s bicycle culture taking off, people are realizing that public transportation is a great way to get from point A to point B without having to pedal everywhere. Most times when I ride the train, the hanging bike racks are full. (There are four bike rack positions per car. A two-car train can support eight bicycles and a three-car train can support twelve.) When the hanging bike racks are full, that means that bicycles are blocking aisles and doors, creating a most unpleasant situation for all in the train. As METRO orders new rolling stock for its system, let’s hope that there are more bicycle racks in those cars. And let’s hope that METRO might re-design their current fleet to add more bicycle positions!

5. Examine, study, and then build the proposed infill stations at 16th Street and 48th Street!
METRO and the City of Phoenix are studying the idea of building two infill stations at 16th Street and 48th Street. I am absolutely in favor of this and I’ll be sending in my letters to the City very soon to voice my support. To me, this is a social equity/social justice issue. Take the proposed 16th Street station. Our neighbors who live in those areas need public transportation and while we’ve run METRO through those neighborhoods, we haven’t given them a METRO station. They’re presently reliant on our bus system, which has become the ugly stepsister to light rail (more on that in January). By building a station at 16th Street, we’re affirming to them that they are welcome on light rail.