METRO light rail wants your input on bicycle accessibility and integration on its trains and stations. Take this two-minute survey. 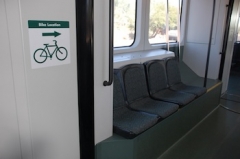 Increasing bike integration with the METRO light rail system will serve to expand the catchment areas in the first and last miles of travel. This will help to accommodate the growing demand of bicyclists and pedestrians, and will effectively grow METRO into a more complete and accessible system.

Click this link or the picture to get started.

…in which I weigh in on some good news: Young people are driving less!

A new report released today by the Arizona PIRG Education Fund demonstrates that Americans have been driving less since the middle of last decade. The report, Transportation and the New Generation: Why Young People are Driving Less and What it Means for Transportation Policy, shows that young people in particular are decreasing the amount they drive and increasing their use of transportation alternatives.

“For the first time in two generations, there has been a significant shift in how many miles Americans are driving each year,” said Serena Unrein, Public Interest Advocate for the Arizona PIRG Education Fund. “America needs to understand these trends when deciding how to focus our future transportation investments, especially when transportation dollars are so scarce.”

Transportation and the New Generation reveals that for the first time since World War II, Americans are driving less. The report showed that by 2011, the average American was driving 6 percent fewer miles per year than in 2004.

This trend away from driving is even more pronounced among young people. The average young person (age 16-34) drove 20 percent fewer miles in 2009 than the average young person in 2001. The report also notes that a growing number of young Americans do not have driver’s licenses; from 2000 to 2010, the share of 14 to 34-year-olds without a license increased from 21 percent to 26 percent.

“With one of our largest ridership groups being between the ages of 18 – 24, we have to provide them frequent and comprehensive mobility choices that support their lifestyle,” said Valley Metro CEO Steve Banta.  “The total transit network, which is many modes working in concert, will help keep our young people in the region and support our local economy.”

“I would rather have good public transportation options than the hassle and expense of driving a car,” said Nicole Barrett, a student at Arizona State University’s downtown Phoenix campus. “It’s time for our leaders to stop debating how much to spend expanding our grandparents’ transportation network and start figuring out how to build the infrastructure that my generation will need for the future.”

“America’s transportation preferences appear to be changing. Our elected officials need to make transportation decisions based on the real needs of Americans in the 21st century,” concluded Unrein.

Take the bus and let someone else worry about the driving. Then, while you’re riding, make a movie!

Here’s another cool advantage of taking public transport: you can make movies and let someone else worry about the driving!

This is a cool video from London called, aptly, a “London Bus Tour.” Enjoy!

I’m not worrying about the upcoming “Carmageddon” in Los Angeles this weekend. But not for the obvious reason you might suspect.

So much has been made in the news about the closure of I-405 in Los Angeles over this weekend. If you haven’t been paying attention:

They have a name for it: Carmageddon.

They have a plan: Stick close to home, if at all possible.

And they have this: no idea what really will transpire when a 10-mile stretch of Interstate 405 in Los Angeles is shut down for 53 hours starting tonight for a road-improvement project in the ultra-busy Sepulveda Pass in the heart of one of the most car-centric cultures in the world.

“Allow me to be blunt: It’s going to be a mess out there,” Los Angeles Councilman Zev Yaroslavsky posted on his City Hall website.

“For those of you who think you can outsmart this potential mother of all traffic jams,” he added, “my advice is simple: save your gas.”

[via the San Francisco Chronicle]

It’s reasons like this why I’m reminded why it’s so nice not to own a car. I don’t have to worry about massive traffic snarls like this. I can just hop on Phoenix’s light rail or bus and get to where I need to go with relative ease. And when I add a bicycle to my transportation arsenal, then that range is extended considerably.

And even if my commute could be shorter by taking a car, there’s one big benefit to not be driving: I don’t have to worry about the driving. I can do things that everyone who’s driving a car shouldn’t to: talk on the phone, text, read a book, listen to music, check email, post something to Twitter, and so on. It’s quality time.

Some thoughts on this from the Vancouver, B.C., blog Price Tags:

My travel time is far too valuable to waste actually driving. Talk about distracting. I don’t know about you, but I find when driving that I actually have to pay attention to stuff. Like other vehicles. And stop signs. And even cyclists.

Given a choice between a faster trip driving and a slower trip on transit, I’ll take the latter, so long as (a) it’s not too much slower; and (b) I can read or listen. If I can plan the length of my commute with accuracy and dependability, then time spent moving productively is more valuable than time spent moving quickly.

So you’ll be catching me on the light rail or even the bus. And if I move to a different city, the big criterion for a good city is its mass transportation system. Because my time is valuable.