This year marks the conclusion of my service on the Midtown Neighborhood Association Board. In that spirit, I offer five Midtown accomplishments from 2018. 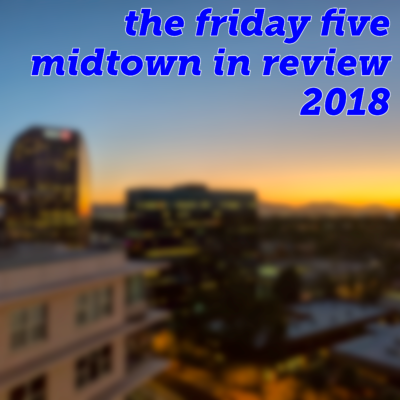 This year wraps up my tenure as Board President as well as my service on the Board of the Midtown Neighborhood Association. One of the greatest honors I have known in my young advocacy career has been to be President of the Midtown Neighborhood Association Board. In the spirit of looking back, I thought it would be appropriate to outline some of what I think are the biggest Midtown accomplishments that I’ve had a hand in over my tenure as a Board Member and as Board President in these past couple of years.

Let me be absolutely clear that none of these Midtown accomplishments are my own. I was extremely fortunate to work with a dedicated group of Board colleagues that constantly challenged each other to think about what a urban-serving neighborhood association should look like. These accomplishments were made possible because of their commitment to midtown Phoenix. Our Board worked to establish consensus not only on our mission imperatives but in how we decided to execute upon those imperatives.

It is therefore in that spirit (and because it’s been unacceptably long since I’ve rolled out a Friday Five post) that I thought it appropriate to encapsulate what I think are the five greatest accomplishments that I’ve had a hand in as part of the Midtown Neighborhood Association Board.

5. We continued to deepen partnerships with other leadership organizations and leveraged their reach to help the Association’s mission. I think one of the most enduring of these Midtown accomplishments is that we continued to develop and deepen partnerships with other Phoenix leadership organizations. The Midtown Neighborhood Association is a dues-paying member of Phoenix Community Alliance and it was imperative for me to make sure we were engaging that group for all we could. While, at best, we could try to wrangle advertising for our quarterly magazine, The MUSE, or sponsorship for our major events, at worst, we were out in the community showing that we are a force for midtown Phoenix.

4. We were able to use our connections with kindred organizations on a shared advocacy agenda. One of the ongoing issues with central-city Phoenix advocacy is that many organizations have blinders on to only the issues happening in their neighborhoods and missing the greater picture. Top-of-building signage has been a big issue since the owners of the BMO Tower (1850 N Central Avenue) inaugurated their sign. When similar signs were proposed for two towers in Downtown in late 2017, we worked with our partners at the Phoenix Downtown Neighborhood Alliance (PHXDNA) on trying to create guidelines for top-of-building LED signage. As I’ve written previously, the issues that Midtown faces are largely the same as Downtown, and it’s imperative that organizations work together to lift and amplify each other’s voices.

3. We continued on the journey of implementing a committee structure. Like all of these, this one in particular was a joint lift involving many of my Board colleagues. The sustaining idea behind this is that we wanted to divorce Association-related tasks from individual people and put those roles in institutional committees that persist. This is also a great avenue to engage the community in our work! While it was a slow start this year, the foundations have been firmly established and it will only continue to grow.

2. We co-presented The Central-City Phoenix Neighborhoods Mayoral Debate in September. I reached out to my friends and fellow neighborhood organization presidents at Downtown Voices Coalition and PHXDNA to see about co-presenting a mayoral debate that was relevant to issues we face in urban Phoenix neighborhoods. Despite the disruption of fire alarms, we did the only debate on central-city Phoenix issues on 26 September 2018 at Burton Barr Library. KJZZ’s Christina Estes moderated using questions and themes developed by our three organizations’ boards and all four mayoral candidates were in attendance. Unique to our debate, we discussed issues like homelessness, transportation, and what the candidates’ plans were to build consensus in City Hall.

1. Midtown’s on the map. The big announcement for Phoenix in 2018 was that Creighton University is set to build a new campus in Midtown at Park Central Mall. With this campus, thousands of students, faculty, staff, will become a part of the Midtown community. Just as light rail and ASU aided in transforming downtown Phoenix, Creighton’s expansion has the potential to transform Midtown, and especially in concert with the transformation going on at Park Central Mall. As I have said, as Park Central goes, so, too, does Midtown. This is a tremendous opportunity and it’s incumbent on any Midtown leadership organization to be sure to capitalize on this tremendous gift.

Even though my service on the Midtown Neighborhood Association Board is about to come to a close, by no means is this the end of my commitment and dedication to Midtown advocacy! I’ve lived in Midtown now for the better part of 13 years. As 2019 rolls in, I hope to have some announcements to share about the next chapter in my Midtown–and urban Phoenix–advocacy.

There is still a lot to do and an uncertain future ahead of us. Let’s get to work.

These remarks on the state of Midtown Phoenix were given at the Midtown Neighborhood Association Annual Meeting in December 2017.

[author’s note: The following remarks were given to the Midtown Neighborhood Association at its Annual Meeting earlier this week.]

As both an Association and as a geographic place, 2017 marked Midtown’s best year yet. Not only did we put on our usual two successful events – Sunday Off Central in March and our fifth Urban Living Tour in November – but we paved the way for future programs and projects to advance Midtown’s standing in Phoenix and the metropolitan area. In the last couple of months, we have reached out to kindred organizations to reaffirm who we are and to break away from that typical Phoenix condition wherein organizations and neighborhoods don’t talk to each other and lift each other up as issues arise.

A great example of this is with our friends in downtown Phoenix. Many of us will be aware of the consternation that has been raised by the BMO Tower sign. Whatever your views on top-of-building signage and their contribution to urban life, we all know that it’s been a great talking point for Midtown. We were able to join our friends at the Phoenix Downtown Neighborhood Alliance, our counterpart organization in that part of Phoenix, to put a hold on top-of-building signage until the City has created an equitable signage policy. The Midtown Neighborhood Association will be at that table.

We have also created a roundtable program for the Boards of Directors and general managers of the large high-rise and mid-rise condominium and co-operative associations in our neighborhood. Anchored by Tapestry on Central and Regency on Central, this roundtable will be a networking opportunity and idea-sharing platform for those involved in the governance and management of some of Phoenix’s largest and longest-running privately owned multifamily communities.

Our agenda in 2018 is going to be full and robust. Many of you will be aware that Park Central Mall is going to be renovated. As Midtowners, we will not be sitting idly by while a once-in-a-lifetime opportunity comes forth to reimagine such a large space of land in our own backyard. This project is too important for us to be on the sidelines and we will work with our partner organizations to make sure our Association’s interests and Midtown’s hopes and dreams are realized.

We will reach out to the arts organizations in our neighborhood, including those that were a part of the abortive “Central Arts District,” to launch a new engagement and advocacy program. Our neighborhood is home to cultural organizations that are some of the Southwest’s most important as well as traditional institutions that are breaking the mold and realizing great success doing so. Long-time observers and friends of this organization will recall that our original name was the “Midtown Museum District Neighborhood Association” as a celebration of that fact. Perhaps it’s time that they have an organization that celebrates the place and time these fêted organizations share with us.

We are also going to begin fundraising and development efforts for our Association. We are a neighborhood association with ambitions and ideas. Our current income strategy isn’t enough to support our hopes, dreams, drives, and ambitions. As a 501(c)(3) organization, your contributions to our organization are tax-deductible (at least for now…). If you’re interested in contributing to our organization,we’ll have information on our website, midtownphx.org.

I can’t imagine a better time to be a part of not only this organization but a resident of Midtown Phoenix. It’s a new day; let’s get to work.