Updating to iOS 8 in the morning when it’s released? Be wary but be prepared: for there are dragons.

Are you going to be updating to iOS 8 when it’s released tomorrow morning? I think I’ll wait. 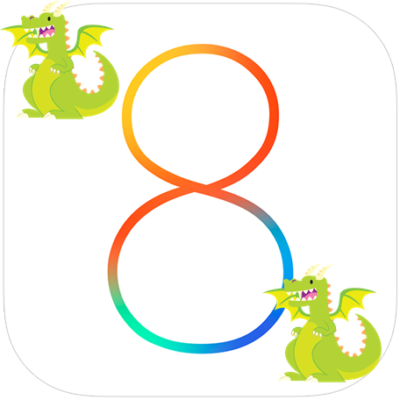 The eighth incarnation of Apple’s mobile operating system, iOS 8, is set to be released tomorrow, probably around 10:00am Phoenix time (following previous release schedules). The biggest feature set of iOS 8 is its closer integration with OS X; however, almost all of the integration requires the next release of OS X, OS X 10.10 “Yosemite,” set to be released later this year. So because a lot of the integration of iOS 8 requires the next OS X release, this might be a prudent opportunity to let Apple get the bugs out of this “point zero” release and not update.

Certainly, the other features of the operating system are very intriguing. I am looking forward to Safari Extensions, mainly so I can enter in passwords I’ve saved in LastPass much easier than a bookmarklet that often doesn’t work or copying-and-pasting passwords from the LastPass app. Alternate keyboards are certainly welcome.

But those nice additions are overshadowed by the perils and possible dragons of the changes to iCloud: iOS 8 significantly reworks iCloud. (Hic sunt dracones = Here be dragons.)

Right now (iOS 7 / OS X “Mavericks”), iCloud data storage is in, essentially, per-app containers. The new version of iCloud, called iCloud Drive, becomes more like Dropbox than per-app containers. Right now, the data I save in, say, Pages, is synchronized to my iPad in the Pages container of iCloud. iCloud Drive data is accessible in all different apps (desktop and mobile), which is a different paradigm than the current incarnation.

If you’re going to update to iOS 8 in the morning, then be sure to select “no” to the upgrade to iCloud Drive option after the update finishes. Your data should still be accessible by apps just as it always has been. If your only entrée to the world of Mac and iCloud is on your iOS device, then go ahead and upgrade.

I’ll repeat: if you’re reliant on iCloud document syncing working between mobile and desktop, then you should probably not upgrade to iOS 8. If you do, then be prepared.