The Friday Urban Dispatch for April 25: density, bicycles, and shade.

The Friday Urban Dispatches are a unique boots-on-the-ground perspective of what’s happening in our own backyard of downtown Phoenix.

Will it be built? News broke this week of the purchase of the soon-to-be-former Childhelp building at 2354 N Central Avenue in midtown Phoenix. While Childhelp has moved to the Phoenix Family Advocacy Center building down the block at 2120 N Central Avenue, Deco Communities is planning a $22 million five-story condominium project to replace the current building. This will be the first new-build project in midtown since the opening of light rail in 2008 and the first new project proposed since adjacent anti-density / NIMBY neighbors in historic districts killed a four-story apartment complex at 3rd Avenue and Camelback near the uptown Phoenix METRO station.

Ballpark density. Another residential project has been proposed for south of the Union Pacific railroad tracks. Marketed as the “Phoenix Ballpark Properties,” the project takes design cues from the developer’s recent portfolio of projects in Portland, Ore., and Denver. Situated on a site containing two historically significant buildings and a warehouse, the two buildings will be integrated into the site while the warehouse will be demolished. It’s a project, it’s density (yay!) and the design is relatively okay. But one does wonder if this design would pass design review in those two other cities.

Bicycle share on hold. The news came out earlier this month that due to supply chain issues, the launch of Phoenix’s “Grid Bikes” bicycle-share system is on hold until later this year. While many in the downtown community are lamenting this, I’m actually quite happy with the delay. As we are starting to march toward summer, bicycling happens with only the most die-hard individuals who have their own equipment. And this gives Phoenix more time to set up actual bicycling infrastructure in the downtown core, which is something I believed should have been done before bicycle-share was launched.

Yet another high-priced destination restaurant. I realize that I’m turning into a sort-of Mr. Cranky when it comes to the opening of restaurants downtown but while I’m sure they have good food, I wonder where the nearby density to support them is. Also, for those of us who prefer to make our own meals at home in our own kitchens (for health reasons, economic reasons, or because we like to make our own food!), where’s our walkable grocery store downtown?

Shade, shade, shade. On Facebook, I posted my three ways to make urban Phoenix more livable and more walkable, especially as we near summer. I’ll share them here: 1. Shade; 2. Shade; and 3. Shade. And no, metal shade doesn’t count…at all. We need trees that provide shade at the pedestrian and bicycling level. And while I realize palm trees are a key part of Phoenix’s history and heritage, no new palm trees should be planted in Phoenix. Existing palm trees can certainly be replaced with new palm trees as the need arises. This is something that I have continuously communicated with City leaders and in my civic advocacy but it always seems to fall on deaf ears. Sometimes the simplest interventions are the best.

For Friday April 4: Friday Urban Dispatches are a unique boots-on-the-ground perspective of what’s happening in our own backyard of downtown Phoenix.

The Friday Urban Dispatches are a unique boots-on-the-ground perspective of what’s happening in our own backyard of downtown Phoenix.

Hance…enHANCEd. Last week was the big master plan reveal for the next chapter in the life of downtown’s Hance Park.  The plan delineates the park into three areas: a neighborhood park on the west, a civic plaza in the middle, and a performance hub on the east.

BIDding for Roosevelt Row. The City of Phoenix is in the process of authorizing up to $80,000 to study whether an Enhanced Municipal Services District (EMSD), otherwise known as a Business Improvement District (BID), would work in the Roosevelt Row neighborhood.  The academic literature is mixed on its assessment of EMSDs but a couple trends and themes quickly emerge: 1. Property values in EMSDs do rise significantly.  For real estate investors, this is good; for independent shops, can they shoulder the added expense of their lease payment?  2. EMSDs are generally instituted in areas that have significant decline in property values or civic interest.  If there’s one neighborhood in central city Phoenix for which that is the exact opposite, it would be Roosevelt Row.

Budgeting for the worst. Since the last Friday Urban Dispatch, the City of Phoenix released their trial budget and their cuts-only solution to ameliorate a $38 million deficit from the books is not pretty.  It closes parks and parks-related programming, slashes operational support to arts and cultural organizations, and places minimal value on the civic fabric of our community.  While I do think some long-standing contracts, including employee compensation, need to be looked at, to fix this year’s budget through cuts only is not right.  Was the 2% food tax phased down too early?  Maybe.

A podcast of action. After Monday, The Downtown Phoenix Podcast will be 3/4 finished with its inaugural series production. What’s in store for it after the series 1 finale goes online on April 21?  Even I don’t know.  I have been pleased with its reception and I am sure it will be back for even greater things.

Thank you, Debra. Tonight is First Friday and I hope that you’ll be able to come by Obliq Art at the Arizona Center for a community tribute to the life and legacy of Debra Friedman, the former Dean of the ASU College of Public Programs who unexpectedly passed away in January. To those who had the great privilege to work alongside Dr. Friedman, it was so evident that the arts held a special place in both her heart and as a cornerstone for the partnerships that she facilitated. 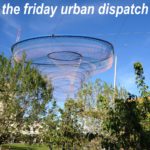 Not just “no” but “no…but what are the alternatives?” One of my conversations this week was with Paul Lopez, a Phoenix native and someone who’s in-tune with the goings-on in City Hall on many levels.  We talked about the need for downtown to have a grocery store—somewhere on the scale between a neighborhood market and a suburban grocery store—and our conversation hit on an important decision-making philosophy: Rather than saying ‘no’ outright, let’s ask this question: “No…but what are our alternatives?”

City Hall is starting to get the urban condition. It’s not perfect but I am getting the sense that City Hall is starting to get the notion that the downtown / urban condition is different and has a different lexicon, vocabulary, and design imperatives than suburban Phoenix.  It’s not perfect yet but the right baby steps are being made.  More promising, however, is that City staff are wanting to listen to downtown interests to make sure that everyone is on the same page.

Whither McDowell Road.  While the previous point is a plus, there are still silos within City Hall that need to be broken down and addressed.  The City’s definition of “downtown Phoenix” goes to the south right-of-way of McDowell Road while their definition of “midtown Phoenix” begins at the north right-of-way of McDowell.   Left out of the discussion is McDowell Road itself, a core east-west street in central Phoenix.  Right now, it’s a nightmare to travel at any time of day.  At 3:00pm on weekdays during the school year, the mass pick-up of students from Arizona School for the Arts makes Manhattan traffic look like a small town.  (The City needs to work with the school to work on a traffic management plan…or the same school needs to encourage its students to take public transportation!)  I like the streetcar line proposed for McDowell Road but that’s a long-term aspiration.

A city in potentia.  Last Friday night, I was walking around downtown to see and hear the goings-on of the Viva Phoenix music festival.  In addition to the musicians performing on their outdoor stages, there was a definite energy downtown: there were people, there was noise, there were even random marching bands walking around.  I’m loathe to use phrases like “seminal moment” or “turning point” but I think March 7 will be looked on in years hence as a turning-point for downtown.

SB1062…sigh. SB1062 has been passed by both houses of the State Legislature and is on Governor Brewer’s desk to sign.  It’s a discrimination bill that targets our friends, neighbors, and colleagues in the LGBTQ communities…full stop.  To say that it’s a “religious freedom” bill is wrong and is an explanation that should be an affront to any person of faith.  Lots of statements opposing SB1062 have been sent along to the Governor’s Office — including Phoenix’s mayor Greg Stanton, the Steering Committee of Downtown Voices Coalition, the Greater Phoenix Economic Council, and others — and one must hope that the Governor has the decency to veto this unconstitutional legislation.  One wonders if Google’s announcement that it’s considering deploying its Google Fiber service or next year’s Super Bowl are in jeopardy. Otherwise, it’s off to the courts.

Where is downtown Phoenix.  The massive fire yesterday at a salvage plant near 23rd Avenue and McDowell Road is out and our first responders did a spectacular job responding to this dangerous situation.  In reporting the fire, lots of media outlets labeled the fire as being “in downtown Phoenix,” something we who live here know is geographically incorrect.  I sent out a “note to media” tweet that said that 23rd Avenue & McDowell is “NOT downtown Phoenix” but I don’t know how many outlets heeded that advice.

Walking and bicycling.  For the past four months, I’ve been a part of the City of Phoenix’s Ad Hoc Pedestrian and Bicycling Task Force, the group that is tasked with looking at the City’s plans for pedestrian and bicycling master plans.  A draft document of a pedestrian safety plan was given to Task Force members and I was generally pleased about its content.  The tone, however, of that document seemed to place the onus of responsibility for their actions more on the pedestrian instead of those around on bikes and in cars.  For pedestrian safety, though, there are two things that can be done that will enhance that in the downtown core: ban bicycling on sidewalks and ban mobile phone use while driving a car or bike.

Pedestrian malls.  Something that I’ve really gotten the feeling of in this town is that we really really don’t like the idea of pedestrian malls.  As the most progressive cities in the world start to think about their future without cars, it’s certainly something that we in Phoenix need to start thinking about.  “What!?” you ask.  “Phoenix without cars?  Surely you can’t be serious!”  (I am serious and stop calling me Shirley.)  Look at the data: We’re past the point of “peak car” — more people aren’t getting their driver’s licenses when they turn 16 or 18.  The first cities were formed in Mesopotamia ca. 5400 BCE.  The first modern cars were driven in 1886—more than 7,200 years after the first cities.  By my math, cars have been around for just about 2% of the time cities have been around.  We can certainly have cities, again, without cars.