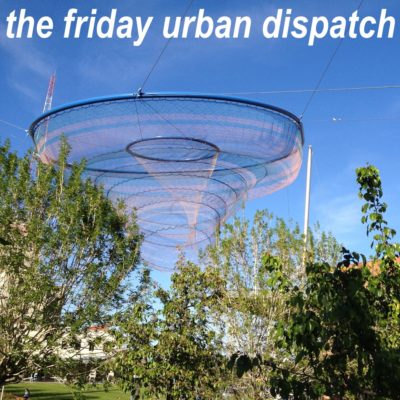 SB1062…sigh. SB1062 has been passed by both houses of the State Legislature and is on Governor Brewer’s desk to sign.  It’s a discrimination bill that targets our friends, neighbors, and colleagues in the LGBTQ communities…full stop.  To say that it’s a “religious freedom” bill is wrong and is an explanation that should be an affront to any person of faith.  Lots of statements opposing SB1062 have been sent along to the Governor’s Office — including Phoenix’s mayor Greg Stanton, the Steering Committee of Downtown Voices Coalition, the Greater Phoenix Economic Council, and others — and one must hope that the Governor has the decency to veto this unconstitutional legislation.  One wonders if Google’s announcement that it’s considering deploying its Google Fiber service or next year’s Super Bowl are in jeopardy. Otherwise, it’s off to the courts.

Where is downtown Phoenix.  The massive fire yesterday at a salvage plant near 23rd Avenue and McDowell Road is out and our first responders did a spectacular job responding to this dangerous situation.  In reporting the fire, lots of media outlets labeled the fire as being “in downtown Phoenix,” something we who live here know is geographically incorrect.  I sent out a “note to media” tweet that said that 23rd Avenue & McDowell is “NOT downtown Phoenix” but I don’t know how many outlets heeded that advice.

Walking and bicycling.  For the past four months, I’ve been a part of the City of Phoenix’s Ad Hoc Pedestrian and Bicycling Task Force, the group that is tasked with looking at the City’s plans for pedestrian and bicycling master plans.  A draft document of a pedestrian safety plan was given to Task Force members and I was generally pleased about its content.  The tone, however, of that document seemed to place the onus of responsibility for their actions more on the pedestrian instead of those around on bikes and in cars.  For pedestrian safety, though, there are two things that can be done that will enhance that in the downtown core: ban bicycling on sidewalks and ban mobile phone use while driving a car or bike.

Pedestrian malls.  Something that I’ve really gotten the feeling of in this town is that we really really don’t like the idea of pedestrian malls.  As the most progressive cities in the world start to think about their future without cars, it’s certainly something that we in Phoenix need to start thinking about.  “What!?” you ask.  “Phoenix without cars?  Surely you can’t be serious!”  (I am serious and stop calling me Shirley.)  Look at the data: We’re past the point of “peak car” — more people aren’t getting their driver’s licenses when they turn 16 or 18.  The first cities were formed in Mesopotamia ca. 5400 BCE.  The first modern cars were driven in 1886—more than 7,200 years after the first cities.  By my math, cars have been around for just about 2% of the time cities have been around.  We can certainly have cities, again, without cars.