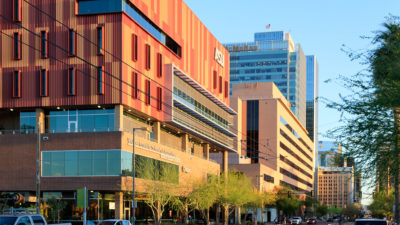 Like all Phoenicians, I was shocked when I heard the news that the library sustained water damage during a particularly intense thunderstorm back in July. Thanks to the quick working of the City’s library staff, the Fire Department, and facilities workers, the damage was mitigated before it could be much worse. Although it’s hard to think of it being worse.

Initial reports were that many of the priceless archives and City historical documents were largely spared. But the building serves as more than a memorial to a Phoenix that’s long gone: it is a temple to the Phoenix of the present and a space for all its patrons to learn about the present to make informed decisions in the future.

It’s also a place of refuge for many, be it in the comfort of a good book or in the necessity of air conditioning on a hot summer day. It’s a cornerstone of Hance Park, the 32.5-acre park that’s a part of the new Phoenix urban moment.

In the fight against anti-intellectualism that’s regrettably become so prevalent in American society, our libraries are a key defense. Burton Barr Central Library’s closure takes away a core part of that for so many.

All City leaders should commit the City’s resources to opening the building ahead of schedule. It is that important to the City’s life and to its future.