The closure of north-central Phoenix’s Metrocenter was announced. Some final thoughts on what was and what might be with the space 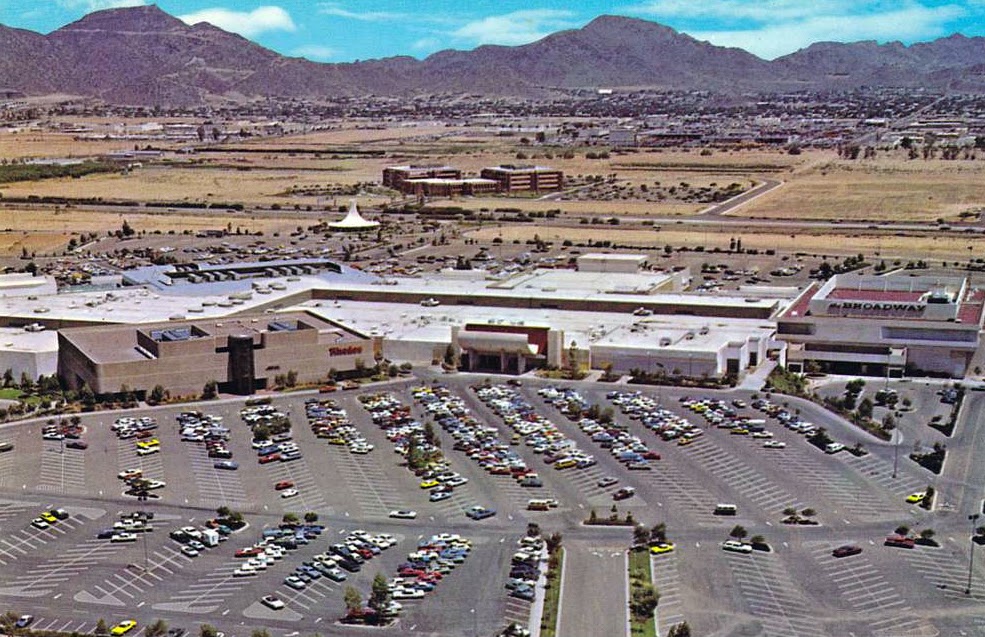 The big Phoenix news story over the past weekend is that the closure was announced of Metrocenter (1973-2020), the struggling shopping center in north-central Phoenix. The mall will close at the end of June after 47 years of operation.

Although this news is not surprising to hear, it is still a bit of a shock to hear the finality of it. The mall opened in 1973 with a record-setting five anchor store positions and 1.4 million square feet of retail space on two floors. For those who came of age in Phoenix in the 70s, 80s, and 90s, it was the place to see and be seen. It reached new appreciation in the 1980s when Metrocenter stood in for a mall in southern California in the 1989 science fiction film, Bill and Ted’s Excellent Adventure.

As shopping preferences changed, so did the major anchors. After consolidations of major players within the retail industry and the financial woes of others, Dillard’s is the only anchor store left open from the original 1973 building, operating as a clearance store, while a satellite Walmart Supercenter replaced the Broadway Southwest store in 2017. On the southeast corner of the site, Castles n’ Coasters remains, while to the northeast, the Will Bruder-designed Cholla Branch library has been in operation since 1977 and a subsequent 1990 remodel.

There’s also an architectural story to Metrocenter. When the building opened, both it and some of the satellite buildings were some of the southwest’s best collections of midcentury modern architecture. The original mall entrances were a quotation of Le Corbusier’s Palace of Assembly in Chandigarh and the architect of the Broadway Southwest building at the south end of the mall (Charles Luckman Associates) designed many other prominent midcentury buildings as well. The satellite buildings, like the 1975 Western Savings & Loan bank branch (lately the Souper Salad, designed by W.A. Sarmiento – the same as Midtown’s Financial Center), added to the flavor. (The mall was postmodernized in the 1990s, taking out the original midcentury modern architecture.)

Too bad that METRO light rail won’t make it out to the Metrocenter site in time, although I would suspect that planners expected Metrocenter’s demise as a mall anyway and a that the site would eventually be reconfigured. Construction of the link from 19th Avenue and Dunlap to the east end of the mall property is scheduled to begin in August 2020 and be completed in 2024.

But as we know, shopping malls are on their way out, possibly now hastened by COVID-19. Metrocenter fell out of favor as development and money went to Phoenix’s periphery or was focused again on its central core. In a sense, this is a fitting and poetic end for the building. As it pulled shoppers away from the central core in the 1970s, shoppers left it for farther places in the 2000s and 2010s.

Long may we remember Metrocenter fondly.

Epilogue. Any proper obituary of Metrocenter would not be complete without this: