…in which I look at transportation as a system — not as bits and pieces — and ask others to join me. 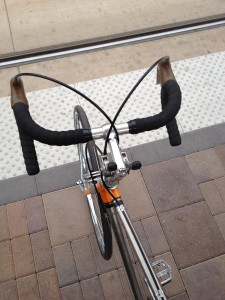 Something’s been on my mind lately. (Well, when isn’t that the case?)

Don’t get me wrong: I love bicycling—even in the desert.  I have a bicycle that I use to get around central Phoenix that I’ve christened as Kierkegaard, after the Danish existentialist philosopher.  The picture here is of my bicycle at one of the light rail stations here in town.  It is my equivalent of a car since I don’t have a car.  I agree that there needs to be better bicycle infrastructure in this city and around the world.

Actually, I should come out here and share this with the world: I don’t have a driver’s license.  In fact, I’ve never had one.  I am sure that I’m going to have to get one at some point; for now, it’s a point of personal pride that I’ve gotten this far without needing one.

I have taken Kierkegaard (the bicycle) on the trains here many times when my final destination is just outside of the reach of my pedaling power.  Bike to train to bike to destination: it’s about the journey and the destination.

We’ll go farther together than separately.