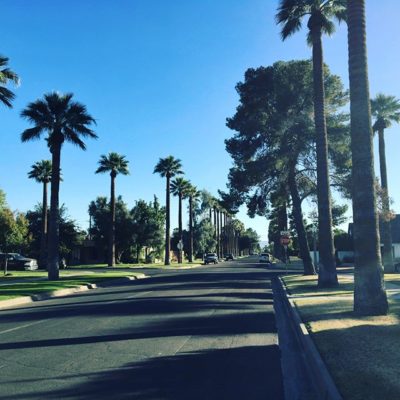 The following email was conveyed to members of the Phoenix City Council, the Historic Preservation Office, and others within the City of Phoenix to express my disdain for unnecessary regulations on murals in light of a few individuals’ complaints about the Phoenix Mural Festival:

In no uncertain terms, I am strongly opposed to the creation of any regulations or restrictions on private property owners to engage in artistic expression and paint a mural on their property. Further, I am concerned that if murals become regulated, other elements of personality and individuality will be up for additional regulations and the City would become one large homeowners’ association with all of the restrictions that have made HOAs infamous.

In his 2011 book Triumph of the City, the Harvard economist Edward Glaeser made this comment: “There is great value in protecting the most beautiful parts of our urban past, but cities shouldn’t be embalmed in amber” (p. 136). Cities are living and breathing embodiments of our history where the present is informed by the past. Like museum relics, however, if something is embalmed in amber, it is most likely deceased.

I am greatly troubled to hear about this row caused by murals painted in historic neighborhoods. I am sure that others have spoken to you about potential First Amendment implications and problems of mural regulation. I am also sure some have spoken to you about if it’s appropriate for City government to police murals painted on private property. As a Midtown community leader and a supporter of the arts, I am compelled to speak at this from a different angle.

In the City’s 2015 General Plan, arts and culture is a core part of the City’s identity. The General Plan’s goal for the arts in Phoenix is, “Ensure Phoenix becomes an Arts & Culture destination by encouraging new public art projects, maintenance of existing public art, and support for arts and cultural activities throughout our communities” (p. 126, emphasis mine). The General Plan was created through a celebrated program of community consensus. But now when its application is at hand, does this City- and community-driven plan mean anything, or will its guiding principles and specific recommendations be ignored?

Creating regulations because a small minority of Phoenix citizens have complained about recent murals undermines the great tradition of free artistic expression that has made Phoenix a welcoming community for artists to make our city better and for all of us as urban advocates to keep fighting for Phoenix.

In closing, I am strongly opposed to the creation of any regulations in any neighborhood to limit the painting of murals on private property.