…in which I share the good news: I have a new bicycle! 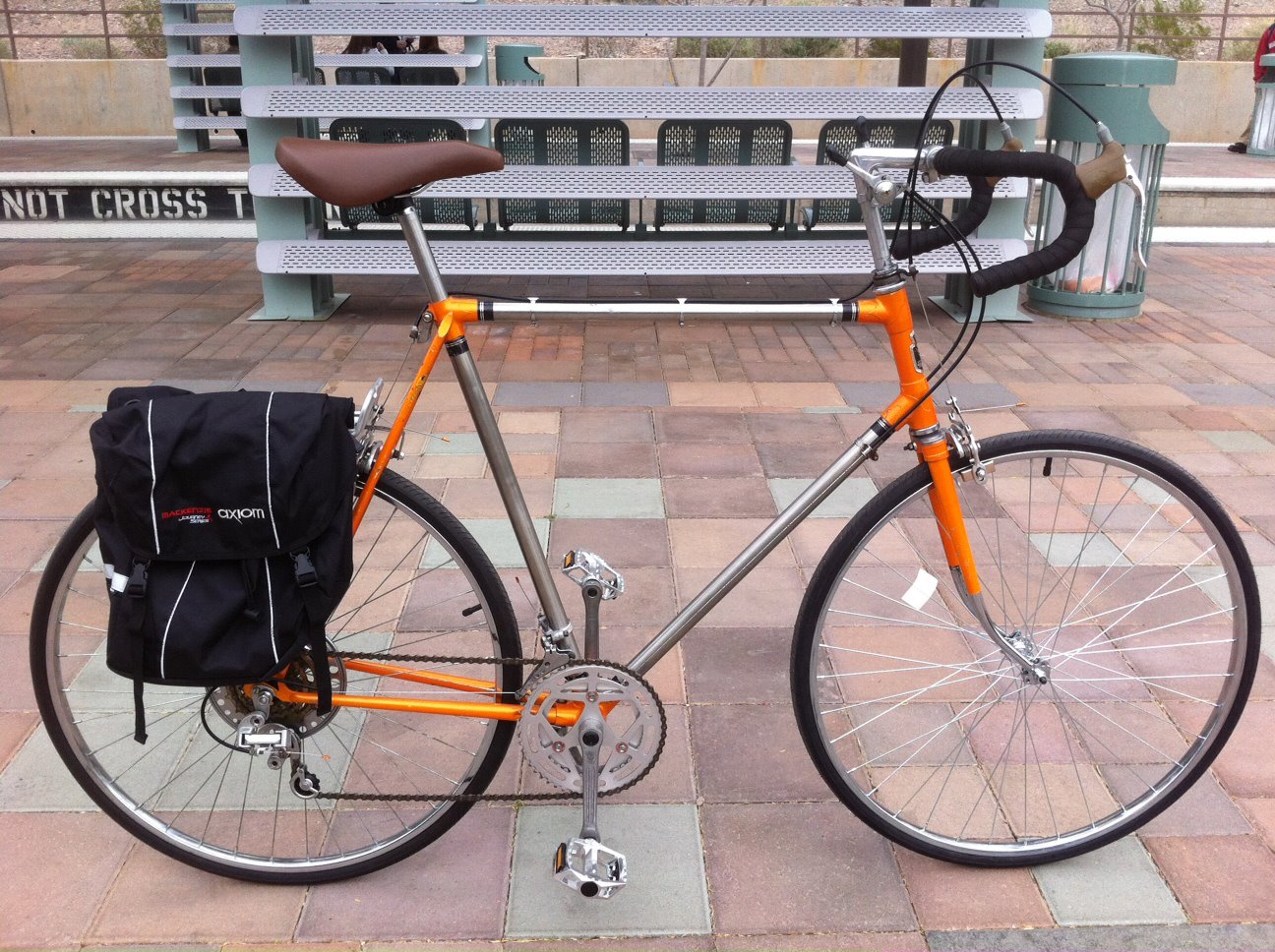 I decided to get a bicycle! It’s a 1980’s Kabuki bicycle made by the same people that make Bridgestone tires. The crew at The Bicycle Cellar in downtown Tempe meticulously refurbished this cycle with new cables, new brakes, new accessories, and an extended seatpost and handlebars. It’s an absolute thrill to ride!

Over the coming weeks, months, and hopefully years, part of this blog will be dedicated to my adventure with cycling in downtown Phoenix. I’ll write down my hints that I’ve learned as a new cyclist, share advice I’ve learned from others, review some interesting technology, rant about the Phoenix metropolitan area’s bicycle infrastructure, and share some miscellaneous ephemera.

With that, I invite you to join me on this ride. Getting to our destination doesn’t have to be solely about arriving. It’s about the journey. Put the helmet on, pack up, and let’s get moving!

…in which I endorse Greg Stanton to be the next Mayor of Phoenix.

As I am sure you have noticed by the endless campaign signs on Phoenix’s streets, there’s a major election on Tuesday, November 8. All Phoenicians will be voting for mayor, and the final two candidates are Greg Stanton, a former city councilman and assistant attorney general, and Wes Gullett, an erstwhile corporate lobbyist.

If you’ve been following my tweets on Twitter or my occasional update on Facebook, you’ll note that I have been emphasizing the importance of getting involved in local issues. Much has been made about the Occupy Wall Street demonstrations that have spawned regional events around the globe, including in our own city. I’m an ardent believer in the belief that true, honest, and sustainable change begins at home.

We want change to happen. We crave change. Other than a very few people, nobody is content with how things are going. And rather than look at things from the big picture and agonize over how we’ll change things (ultimately settling with the status quo), let’s look here. Let’s look at our own Phoenix.

It’s probably redundant to say that Phoenix has fallen behind in many things over the last decade. We have let side conversations drive our political conversations instead of looking at the major issues. If you read The Arizona Republic‘s endorsement of whom they want to be Phoenix’s next mayor, they identified changing the city’s pension system and revising its employees’ benefits package as the two big issues that will face Phoenix in this decade. And while these are important issues, as you and I know, there are far more important issues that need to be not only addressed but tackled by Phoenix’s next mayor.

In its next decade, Phoenix has to address many issues that are far more important than how the city compensates its employees. Our local leaders have to look at how we can move forward far more sustainably. And I mean absolutely more than just installing solar panels on parking shades: I mean looking at supporting things that can and ought to be sustained. We need to look at expanding and enhancing the region’s public transportation, we need to look at making historic preservation a top priority because “the greenest building is the one already standing,” we need to encourage people-friendly pedestrian development, and we need to develop networks for alternative modes of transportation. My list could go on and on.

These issues aren’t conservative issues nor are they liberal issues. Nor is this race about garbage collection, water rates, or permitting processes. The race is about advancing LOCAL issues like thoughtful investments in our local economy, including education, quality jobs, and smart economic development. We want a leader who will advocate for Phoenix first and use the bully pulpit afforded to the Mayor to challenge and to change this state’s regrettable education policies, missed action on advancing clean energy, and reputation in the nation and around the world.

By the City of Phoenix’s own laws, this election is a nonpartisan race. One can argue how the election has turned extremely partisan. One sees signs about whom “taxpayers support” and what sides the public safety employees support. Or one sees which candidates are being supported by political parties and by political action committees.

The candidate that will build consensus in Phoenix, bring all sides to the discussion, and lead Phoenix forward by dreaming outside of our collective comfort zone is Greg Stanton. I encourage you to join me for voting for Mr. Stanton and making Phoenix’s next decade its best decade. Mail-in ballots have been mailed out and voting ends on November 8. For more information, check the City of Phoenix’s Elections website.

[Author’s edit: Check the bottom of this post for a link to my photos.]

Today was just a great day to be alive and in downtown Phoenix. The weather was finally beautiful after an endless summer in the desert!

And this morning was also Park(ing) Day 2011, an annual event where citizens, artists and activists collaborate to temporarily transform metered parking spaces into “PARK(ing)” spaces: temporary public places. It forces us to consider public policy and what type of parking is more appropriate in an urban environment: car parking or people parking?

This year, my friend Donna Reiner and I set up and played some piano duets, ranging from absolute beginner to Clementi, Mozart, Diabelli, and Fauré. Even at sight-reading, I thought we were pretty good.

Anyway, some pictures and videos (with more being uploaded throughout the day…check back tonight for more):